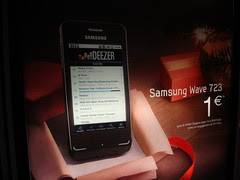 Paris December 2010
Originally uploaded by Jonathan Marks
There is still a lot of confusion out there about the economics of audio over the phone. I was recently in Paris for the great LeWeb10 conference and passed by ads for the Samsung Wave. First phone I have seen with a prominent menu option for webradio. That means you stream the audio via 3G rather than picking it up from FM or AM. I remember Nick Piggot of the RadioDNS.org project pointing out at IBC that if you were to stream the equivalent of a month's worth of FM/DAB listening by the average Brit, then the download would be about 2GB. That is just not going to scale, nor would I like to rely on a 3G network during a natural disaster. We had a case of that on 9 December when it decided to snow and Paris came to a standstill.

And if you're travelling abroad, as I was, I note that KPN was planning to charge me 5 Euro for a MB of data - so I would have had a monthly bill of 10,000 Euro if I had decided to use my phone as a radio.

I saw colleagues trying to buy local SIM cards, only to discover you needed a French credit card or that it took 48 hrs to activate the data account. In other words, web-radio is great as part of an audio solution. In areas with an uncapped fixed price data rate, it is fine. But the operators are rethinking what they mean by uncapped - I see examples where 250 MB is regarded as the max for fair use.

So it's a bit early to be dumping broadcast networks, although I think AM will go away quite fast. DRM has failed to attract the interest of the receiver manufacturers and the cost per listening on shortwave was decided when oil was 40 dollars a barrel. But FM and DAB+ are an important part of a hybrid mix for audio. 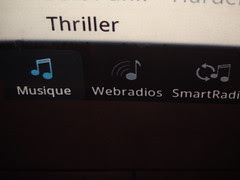