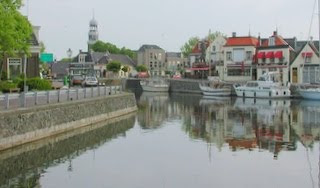 Another vintage Media Network for you from 1999. In this edition of the show we were messing about in boats. For instance, Light Vessel 18, the former Trinity House lightship was nearly ready for her new role as a floating Radio Station to help celebrate the Royal National Lifeboat Institution's 175th anniversary. Radio Northsea International was planning to be heard over in the area of the English county of Essex and beyond starting on 3rd August 1999 on 190 metres medium wave, that is, 1575 kiloHertz. This revivial was only for the month of August.

This programme also updated the story about Quality Radio 1224 kHz and quashed the rumour that AFN was planning to close down its Frankfurt transmitter on AM. I also like the preview of the Funkausstellung 1999 from the late Bob Tomalski. He was brilliant - still sadly missed. And he was spot on in his predictions. The photo is taken in Lemmer, one of the harbours on the Ijsselmeer lake "
Posted by Jonathan Marks at Tuesday, December 14, 2010