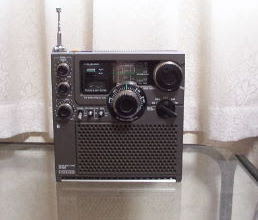 This was a regular edition of Media Network which aired on my birthday in 1999. In this week we included an interview with Quentin Howard, then the boss at the UK Digital radio network Digital One. Interesting to hear how the debate about digital radio seems to have moved forward rather slowly since then - although there are far more receivers on the market than 11 years ago. The UK is now facing a first-mover challenge with so many DAB radios in the market. Countries like Australia that now adopting digital radio are leapfrogging to DAB+ which uses the codec that Quentin believed back then was not robust enough.

The programme also dipped into the archives to hear a profile on broadcasting in Congo compiled by Richard Ginbey. I find those off-air recordings conjure up a completely different world when radios like the one shown here were state of the art. It was the Sony ICF5900W - crystal controlled if I remember rightly.
Posted by Jonathan Marks at Sunday, December 26, 2010