French on the left 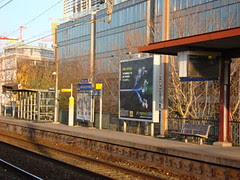 Issy Val de Seine
Originally uploaded by Jonathan Marks
Now here's a nugget of information for parties. Sorting through photos of Paris, I realise that French trains run on the left. Wikipedia reveals that trains often do not operate on the same side of the road as cars do. In France, for instance, the first train lines were built by British engineers, so kept to the left. The Paris RER trains keep left, but have to operate on separate tracks within the Paris Metro area which was designed to run on the right. Another anomaly occurs in the Alsace-Moselle region, where trains keep to the right because the lines were built in the late 19th century when Alsace-Moselle had been part of Germany. Bridges at the former border allow the trains to swap sides.

Now get back to work.
Posted by Jonathan Marks at Sunday, January 06, 2008

Trains in Belgium generally run on the left, no doubt because George and Robert Stephenson

"planned the construction of an extensive system of railways in Belgium, extending on the one hand from Ostend to Liege, and on the other, from Antwerp through Brussels, to be connected through Mons with Valenciennes, altogether 347 miles of railway."

[quote from from "Our Iron Roads", by Frederick S. Williams, and originally published in 1883.]

Actually RER trains can not run on Metro tracks for another reason: The Metro power supply is a third rail system (not speaking about the rubber-wheel lines at all here...) while the RER lines have overhead catenary, some lines 1.5 kV DC, other lines 25 kV AC (so only trains equipped for both systems can run on all RER lines!).
In the Czech Republic you can find some lines with left track operation, as opposed to the right track operation elsewhere. It's indeed just a matter of who build the lines, and it never gets changed because it would cost quite a lot without creating any benefits. Consequently traditional German railway operations terminology also did not speak about rechts and links but instead refered to richtiges (right in the sense of correct) vs. falsches (wrong) track. Some nitpickers objected this, arguing that there are no such things than wrong tracks, although it was in my opinion an appropriate term since it is really a special thing to let a train run on the wrong track (which requires written orders being given to the driver if no signalling is installed for reverse-track operation: Rides on wrong track from Elsterwerda-Biehla to Plessa, can pass signal D despite stop aspect, stops at the position of entrance signal F at Plessa also in case signal should be clear, allowance to proceed will be given by order form Ad).
That's really something for your next party, eh?