I don't pretend to know much about French politics. That's because my French isn't good enough. But I do know quite a bit about international media. And the announcement earlier today (8 January) by President Nicolas Sarkozy is just plain stupid. Although it is true that French international broadcasting suffers from a lack of coordination, Sarkozy also seems to believe if France wants to share ideas with the world, that is best done in French - with some foreign language subtitles. If that were true, CNN with French subtitles would have a major market share in France at this moment. Subtitling doesn't work because it can only help you with the content not the context of a story.

"I think a public channel, France-World, that would retain the identity of each of the participants, can only speak French," the president said. "I'm not inclined to use taxpayers' money to broadcast a channel that doesn't speak French," he is quoted as saying.

He has called for a new state-owned channel called France Monde, bringing together the resources of TV5, France 24 and Radio France Internationale [RFI], to be set up "this year" and to broadcast only in "French". "There could perfectly well be subtitles according to region - Spanish, Arabic, English - to provide France's point of view". The idea is to create "as rapidly as possible, in any case this year" a "France Monde [France World] label, that is a holding company that would unite the resources of TV5, France 24 and RFI in ways still to be debated" to "provide a much more imposing French presence than at present".

This is clearly a case of death by integration. RFI and France 24 are two completely different beasts. Personally, I think France 24 is way ahead of its radio counterpart. That's because they have integrated their foreign language production in Arabic and English from day one. So they share resources, but craft each channel according to the target area. That's because they are aware that they have competition. Visiting there last month, I was impressed by the buzz in the building and the way they were putting French stories into an international context.

RFI does a good job in Africa, where its French service plays an important role in the Francophone countries. Its weakness has always been the RFI foreign language services which are relatively expensive to run, on the air for only parts of the day, and of a varying standard. They have never really embraced the web, prefering to stick with linear storytelling through radio. Integration of RFI English with France 24 English just won't work on any platform. Just compare the websites of RFI English with France 24, it is night and day.

So yes, they can all do a better job of co-operation. France could beat the US tomorrow in the international broadcasting game- infact I think the figures prove they already have. There are some obvious savings that can be made on the radio side. But a French-only policy is definitely NOT the way. For France's sake, let's hope the President has indeed confused the missions, culture, language and purpose of these organisations. And that's one hell of a confusion for just one evening. I hope he has started a debate not announced a decision.

I see the BBC coverage is phrased as though France 24 is finished and off the air. I think that shows that France 24 is making an impact if their journalists cover it in such a way.

Sarkozy's other idea of financing French public TV through a tax on Internet services (and creaming some of the profits from the private channels) has some merit, providing the French public media become a lot more accountable to the public.

I get the impression that Sarkozy has already given up on radio as a medium of influence. He interchanges the use of media and television, but never media and radio. 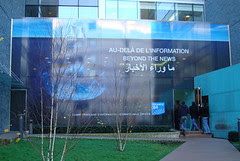 The idea of using French audio only is truly bizarre and seems like "typical Frog arrogance". They need to look to Deutsche Welle TV which has alternating one hour blocks in German and English. Or emulate Euronews - no on screen presenters, but several languages on different soundtracks.

I totally agree with your comment, dear Jonathan, on the stupid idea to mix RFI, TV5 and France 24. I like your formula “death by integration”.It is true that the status, missions, and professional habits and tools of the 3 firms are different and I don’t see Sarkozy’s recipe to end as a tasty plate for the foreign consumer of french audiovisual products.
When you come to compare Rfi and France 24, it is true that the Internet dimension hasn’t been taken into consideration for years by Rfi, due, partly, to a dramatic lack of financial means and, mainly, by an impossible evaluation of future prospects by the present managing team in charge of the radio...
If the french language has finally got a fair space on Rfi site, the foreign sections remain treated like a poor relation. And if there is something interesting and consistent in Rfi english and spanish Internet pages, that is thanks to the journalists and other staff working in those sections...
France 24, TV5 and Rfi do exist and try to do a good job. With a real capacity for France 24 to publicize and advertise (that is not the case for Rfi!).

In a context of poor budgets, a reorganization of the french “Audiovisuel extérieur” is probably necessary, taking into account the respective roles of the various medias and the room left for them in 2008 by Internet. But coming back to the 1974 situation when Giscard reduced his international radio to a french channel (with a short program in English and another one in German) will be more than a new error: a fault.
It is true for Rfi and for France 24 as well.

Thanks for the comments. There is one major difference between 1974 and 2008 and that is the effectiveness of analogue shortwave radio. In "our" day as respective programme directors there was a healthy audience, which wrote a lot of letters and occasionally phoned in.

Now, when FNAC and other outlets are discontinuing sales of shortwave radios, it has become the medium of last resort. Yes, there are a few countries where SW is the only way in - but they are not very high on the priority lists of European governments. But it is not just the distribution - it is also the quality of the programmes. I challenge anyone to turn up at one of the TV "Dragon's Den" programmes with the "49 metre band" in their portfolio as a something that is set for a revival.

It has become too much of a jumble sale of unfocussed, uninteresting material that clearly has lost its way. The focussed shows are on FM in certain target countries and they don't need 500 kWs of crackles and bangs to get the message across. As a radio "buff" it breaks my heart to say it - but shortwave radio is no longer a going concern. May be you can drop me an e-mail to continue the discussion off-line?

If you don't mind, I'd really like to read more of your discussion here.

To take care of Alman’s wish to follow up our discussion on your blog, let’s do so…

You are right, Jonathan, saying that short wave have no future (with the exception of some zones having no free information, no reliable and cheap Internet connexions, no satellite downloads available or even, no electricity to feed computers and Tv sets).
For the moment it is just an alternative tool in case of political problems with the programme relayed locally by a FM transmitter (Rfi faces regularly that type of situation with some of its 170 FM relay transmitters around the world).
The question is double: “is any future for international radio?” and, “is any future for the radio medium in general?”
Answers are not obvious as they will be different according to the context (cultural, political, technical, listener’s habits) that we study.
Talking of international broadcasting, there is no other way to-day :
together with the sound, broadcasters have to produce texts, pictures and videos for their sites with contents based on accurate and honest information (avoiding propaganda), bringing different views, analysis and comments on national and international events. Doing so, they offer a good service to their “listeners-readers-viewers”.
As for the radio medium in general, its role has been declining those past years. Lack of interesting programmes, search for the lowest common denominator… Listeners are flying away. How to reverse the trend? Once again, reliable news, good programming, pod casting, interesting sites, are basic ingredients of a successful recipe.
But we, broadcasters, have to cope with at least two unpredictable factors: the market (or the State budget for public broadcasting) and the evolutions of political life. From both points of view, I must say that, in France, we face for the moment a tricky situation.
Guy

I think we're on the same lines. You need to identify the information needs in the country or region you want to target, you then need to look at what relevant expertise you have to share with that group of people, and then pick the relevant medium. I went to a great seminar in Amsterdam yesterday, where there were examples shown in Ghana with both FM radio and mobile phones being used for a health and safety campaign. I remember that in Nigeria, when they wanted to tell people about driving on the other side of the road, they challenged singers to come up with a pop song and more than 50 got into the charts. When the day came in 1972, less then 10 people were killed on the day of the changeover. So what international media need is the right content in the right context. There are still countries where that means SW radio is the first choice - but of the 196 or so countries, there are not many. I listen to shortwave I hear too many people making programmes by dragging and dropping items into a playout system, with all the passion being lost in translation. They are, in effect, a victim of their own routine. Coupled with the huge difficulty of measuring the size of the audience means SW has become a very expensive way of sharing an idea.