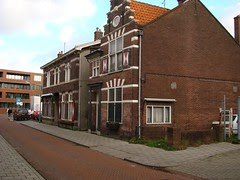 Hilversum unplugged
Originally uploaded by Jonathan Marks
Hilversum media park is trying to promote itself as the third major media hub, after London and Paris. Yes, folks, it is really true. Problem is that while the media park has all the latest facilities, downtown Hilversum is not an inspiring place for anyone with a creative flair. It looks like it has been built a bit like a TV set - if they have to leave quickly it won't take long to dismantle.
Posted by Jonathan Marks at Tuesday, December 04, 2007