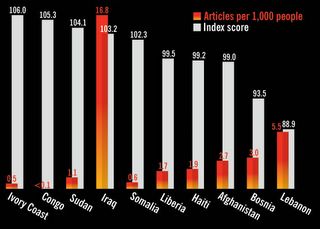 Foreign Policy magazine has published its new annual listing of the top 60 failed States. One of the charts shows what happens if a state fails and nobody notices? The reality is not far off in several parts of the world. They compared the index scores with the number of stories written about the countries per capita - western media that is. Iraq dwarfs other at-risk states in terms of media attention: It receives more than five times the coverage that Afghanistan and Bosnia do. The most at-risk states (according to Foreign Policy), such as Ivory Coast, Somalia, as well as the Democratic Republic of the Congo, barely register on the media�s screens.