Disappearing before your eyes (and ears) 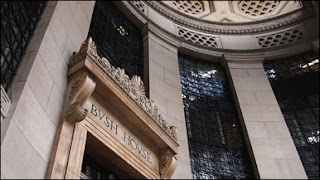 It's a week ago since the BBC World Service broadcast from a special tent inside Bush House. 7 days is a magic time in UK public broadcasting, because after a week a lot of content expires and is no longer available. And that's started to become the case already with the programmes from the tent. Yes, they are still up there as streams, but the Mp3 version of the interview with Attenborough has gone. And why is the two part programme on Bush House with John Tusa on a different page altogether, mixed with the infamous announcement of the drastic cuts to World Service in January 2011? BBC World Service has great content. But you have to really consume it on the day of transmission. Finding stuff, in context, especially a few months later is difficult, if not impossible. In fact a lot of useful stuff (like extended news bulletins are not available as an archive). That's where a rewind button on the digital radio is rather useful. 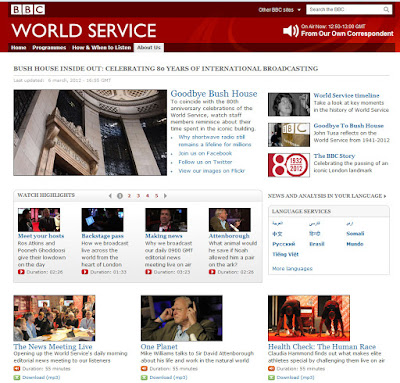 I found the 2 hr Newshour special on the future of international broadcasting (as billed) was fascinating. Lyse Doucet described it more accurately at the start of the programme as the future of international news. Major difference. It's clear that the BBC World Service has a clear vision of what it wants to do as a news organisation. I was left rather confused as to what it really wants to do with radio, especially features and anything that is not "rolling news". To me, the future needs to be hybrid. And a coherent mix of radio, TV and online. Radio is awful for sharing lists of facts (better off using a map during an emergency), but it's much better at gathering, sharing and debating opinions. Especially in countries where cameras are inhibiting people from speaking frankly, radio could be doing a lot more to gather those thoughts. Watched with interest the experiments with audio that Al Jazeera did in Moscow. Thought they might be using audio because people were afraid to speak openly. But then they posted pictures with the audio which defeated the object. I would have mapped the video clips in that case.
Posted by Jonathan Marks at Wednesday, March 07, 2012