More Questions than Answers after Dutch Freedom for the Internet conference 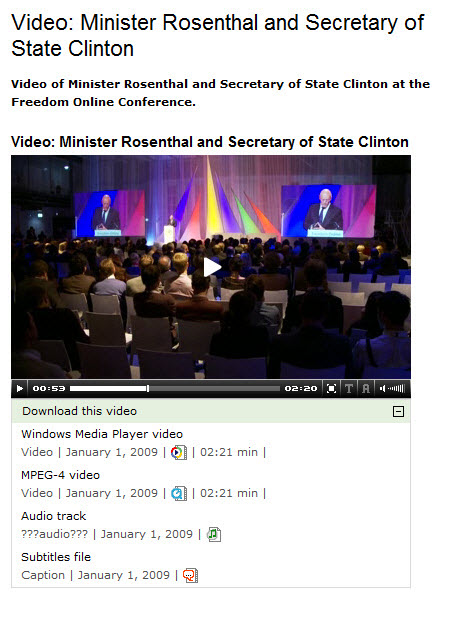 Governments are truly awful storytellers. And this was brought home to me by watching a conference on "Internet Freedom" pumped into the Interwebs at the command of the Netherlands Ministry of Foreign Affairs. If you look at the website now, you'll see a short "event" video which captures what looks like a party atmosphere and the arrival and departure sequences of US Secretary of State Hillary Rodham Clinton. It looks like something you'd see on Egyptian state TV two years ago - you know... "Important people were invited to hear other important people speak at a conference". Here are a few sound-bites they want you to hear. Then they all had drinks and went home." Truly awful event journalism which reveals nothing of what was really said or what the motions were for the "debate".

You're invited to download this earth-shattering story, which according to the metadata was recorded on New Years Day 2009. The Ministry also thought it a good idea to publish a list of attendees. The government website also has a few declarations on it, but doesn't give away the clue that the event was blogged on Facebook where the event has so far scored 812 likes. Looking at the official report, you'd swear that Eric Schmidt of Google must have sent in a video greeting because he doesn't figure at all in the conversation. Except that he WAS there, as evidenced by a video on YouTube which has been watched 13,300 times so far.

If you want to follow what Hillary said, in full, then you need to check the US State Department website because you can't embed that video. I frankly don't understand the second line in her remarks. "I want to thank my colleague and friend, Foreign Minister Rosenthal, a longtime friend, and co-conspirator from time to time, Eric Schmidt." Conspirator? Poor choice of words in such a setting. 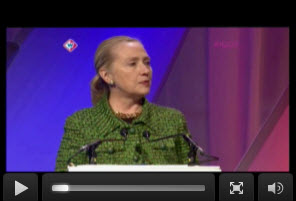 You have to search the new Twitter with the hashtag #ifreedom to discover the best write up of the two day event, on the UK demworks blog. The official twitter account claims the conversation will continue until a follow-up conference in Nairobi, Kenya. One week after the conference, it doesn't look like that goal has been achieved as the conversation has stopped. And I note that the Google blog hints that they will be organising the next conference in Africa rather than the Dutch government.

Knowing that many human rights activists use Facebook for publicity and organising purposes, but deliberately keep sensitive conversations well away from this platform, it seems bizarre to be running the conversation thread almost exclusively on Facebook. And bearing in mind Google was helping to sponsor the whole show, why not Google+?

The conference signs off with the triumphant news that the Netherlands Foreign Ministry will spend up to 6 million Euro on supporting Internet Freedom Activities over the next few years. That really means 1 million a year spread over 6 years by the look of it. Compare that with the 25 Million dollars the Pentagon has openly devoted to busting through firewalls, another 10 million given to the Broadcasting Bureau of Governors by the US State Department, a whole bunch of initiatives being financed by other sections of the State Department (e.g. techwomen.org) and you can see that the Netherlands effort isn't going to get very far. And all of this pales in comparison to the 125 million Euro set aside for an Internet Freedom Fund by the European Union.

As more and more mobile phones are used as the gateway to social media platforms, we're left with the bizarre situation that many of the interception and firewall filter technology being used by the "axis of evil" countries was developed in the West. It's been that way since the French companies sold high-power broadcast transmitters to Iran, so they could block Western broadcasts. Or the Brits selling satellite blocking technology to Kazakhstan last year.

There are some interesting things going on in this sector. But is it a coherent story? Not at all. Is the money being spent in an effective way? I fear not.

Email ThisBlogThis!Share to TwitterShare to FacebookShare to Pinterest
Labels: "The Hague", #ifreedom