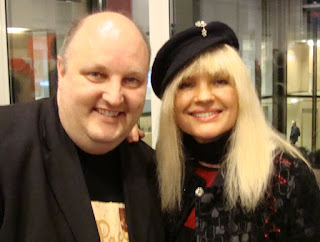 It is not often you see musicians coming to say thank you to broadcasters, especially pirate broadcasters. Yet, that's exactly what American pianist, singer, & songwriter Chi Coltrane did this afternoon, delaying her trip back to the West Coast to greet participants at the Radiodays meeting in Amsterdam. She gave us a superb impromptu mini-concert and in her on-stage interview with Herbert Visser of 100%NL. she was particularly grateful to offshore broadcaster Radio Noordzee Internationaal. They played a lot of her music in the early 1970's and that triggered producers at TV stations. Interest in her music was reason enough to move to Europe during that period with plenty of gigs in The Netherlands and Germany. Now back in the US, she recently relaunched her music career. The years have been kind to Chi, she's lost nothing of the power in her voice, nor her ability to write memorable songs. Bought her latest CD, Yesterday, Today And Forever, which also entitled me to get the photo and play the fan. Worth every cent.