Thumbs Down for the Big "C" 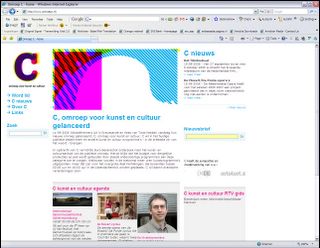 It is truly incredible. Whenever two or more Dutch public broadcasters get together, then they will form their own broadcasting organisation. The Big "C" stands, not for cancer, but for Culture, which the initiators think is not getting enough exposure on Dutch TV at the moment. I think they need to get a reality check and a strong cup of coffee. While it is true that there has been a lot of dumbing down, the kind of culture these guys mean is purely high culture - events which are already generating money and getting subsidies. Culture in the Netherlands will not die out if this cultural broadcaster never gets a licence. But its another sign that something has to happen to Dutch domestic public broadcasting - and fast. Hilversum has become the graveyard of creativity. There has been some interest from abroad in doing larger scale co-productions. But these broadcasters are so divided that they will never get their act together to do great things.