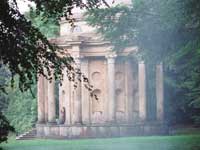 I must confess that I only buy DVD's where there's a directors commentary on it. Even though I bought the film ages back, today was the first chance I had to sit down and marvel at the camera work of Pride and Prejudice. Those fantastic tracking shots at the stately homes in Derbyshire look absolutely superb on a large screen. HD is coming, but this wasn't bad at all. Great acting as well, especially from Keira Knightley. She has a face of thousand expressions. UK Tourist Board does clever sites showing the places where it was all filmed, with deals so you can retrace the actors footsteps. Wonder why the Netherlands Board of Tourism doesn't do the same thing?
Posted by Jonathan Marks at Monday, September 25, 2006