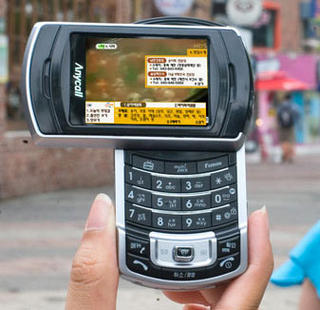 In Paris earlier this year I managed to see some of the new DMB receivers coming onto the Korean market. It would appear the final result is even more sophisticated. Samsung's new SPH-B2300 which has a clever swivel display to cope with new TV formats.

Forget the i-pod video where you cannot watch live video events - this is the kind of device that will attract the average consumer. In Korea, the premium channels show soap opera episodes ahead of network TV, giving people something to gossip about on the train.

Forget the i-pod video where you are paying through the nose for low-res video you can only really consume on the device itself. With a lot of European video being produced in 16 by 9 now, the video screen on the i-pod is already the wrong shape.

Put me in the Apple i-video sceptics camp for the time being. It is the content, not the technology that will drive this movement. In The Netherlands, it was local Tv networks that drove up viewing figures because people want to be entertained in their own language first. They place much lower value on US content. I can see someone in a Dutch pub sharing a piece of video from Paul de Leeuw. I don't see them sharing a scene from Lost - certainly not at US$1.99 a pop.
Posted by Jonathan Marks at Tuesday, October 25, 2005

The content from the video version of the Apple I Pod is MPEG 4. But it's still postage stamp video.
The cost for the download of certain US top ten TV shows isn't all that bad cost wise, but it's cheaper to home tape or dvr with Tivo.

Yes, that same MPEG-4 video is low-res when shown on a TV - and I guess it is going to look terrible on a 16:9 screen. I wonder how much people are willing to shell out per month for video that can only be viewed on one device. 1.99 doesn't sound much, until you realise that once you've bought it, you can't zap to other content if it turns out to be boring.