Back home at last after nearly 3 weeks of travelling to Mexico City, Spain and Switzerland. I am delighted to find people in the radio and new media business who understand communities and are looking at the new "social" media like wikis and blogs to get closer and involve their audiences. 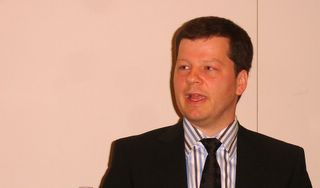 My most interesting discovery was a company called Octoshape, based in Copenhagen. They have a technology which allows a much more efficient delivery of "live" streaming over the Internet. At the moment, someone like the BBC has to produce and pay for thousands of separate streams to serve relatively small audiences to its audio and video streams. In a crisis, no system can cope. This technology means that users downloading a stream also act as transmitters for others.. bit like Bit Torrent but then for live streaming. Steven Alstrup has certainly come up with a technology for the future!

Now to get some sleep and sort out the washing
Posted by Jonathan Marks at Wednesday, May 18, 2005