Steps in the Right Direction 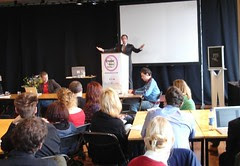 I am positive about last Thursday and Friday. 300 people from 20 countries gathered in the heart of Amsterdam to discuss issues that govern the future “creative capital” of this country – and indeed the whole of Western Europe. In 2015, India will have more than three times more qualified scientists (60 million) than the ENTIRE Dutch population (currently 16 million). And that knowledge will cost 10th of the price than can be found in Europe.

So is Europe, and the Netherlands in particular, destined to become the retirement home for the world, with frequent visits from Chinese tourists curious about empires of the past? A few people are waking up to the fact that something must be done if that future scenario is not going to become a reality. Already, too many intellectuals are leaving the Netherlands (both foreigners and Dutch nationals), with 2004 having the largest emigration figure (40,000) since the 2nd World War. There are more than 300,000 empty workspaces in the Amsterdam area – the IT ‘Silicon Polder” area near the Amsterdam football stadium arena is a wasteland of empty offices.

In good times, Amsterdam had a “West Coast” feel, just like the US West Coast. Inspiration, both creative and technological, came from a salad bowl construction…people from all kinds of background bumping into each other in the inspiring surroundings of the canals and houseboats of central Amsterdam. There was a buzz, a feeling that cool things were happening, that anything was possible and there were incentives to get things done.

Like a knife, the blade in Amsterdam has dulled. Routine has set in – as well as the Dutch desire to organize and regulate. With the routine, “norms” have been set which celebrate mediocrity, rather than reward the outstanding. Success is not celebrated, it is frowned upon. And rather than get stuck in this celebration of mediocrity, younger Dutch professionals are getting the hell out of the country.

That’s a hell of a shame.

The conference in Felix Meritus last week was the first time I have seen creatives, business people, academics and government get together to discuss the issues in a broader forum. I thought the mayor of Amsterdam. Job Cohen, set the right tone for the meeting, speaking about what Amsterdam needs to succeed – infrastructure, tolerance and an ability to act as a catalyst for new ideas.

Members of the newly formed Dutch Connection got the chance to interview and debate with the keynote speakers.Stephen Graham, Pekka Himanen, Joichi Ito, Charles Landry Charles Leadbeater Geoff Mulgan. They showed that the leaders of the future are coaches for society, operating on a sharing model rather than shouting and spin doctoring. I am currently shaping those video interviews into a new series of video podcasts to be released soon.

So what needs to happen?

Amsterdam needs to stimulate a much better mix of ideas between academics, business and public institutions. Ultimately, the creative spaces need to be everywhere in the nationals capital. But to start with some centres of excellence need to get cracking on some innovative projects. I see some seeds already starting to germinate. They need to be nurtured and their growth stimulated. They will flourish by being seen as centres of excellence, providing they remain inclusive to society, not exclusive. The seeds of success will be killed off by mediocrity and “stichtingization”. They will benefit from “think global, act local”. I’m optimistic. I think that after this dark period of Dutch indecision, it could be that a tipping point has been reached.

Two national politicians also gave speeches: Judith van Kranendonk (Director-General Culture and Media, Netherlands Ministry of Education, Science and Culture) and Karien van Gennip, State Secretary of Economic Affairs. Both their speechwriters should get the award for missing a great opportunity to show that politicians are listening to all “creatives” in society. May be they had good intentions. But because they didn’t stick around for anything more than their speeches, both politicians missed the opportunity to bust the clichés as “only politicians”. Looking at the body language of the audience during the speech by Karien van Gennip at the end of the conference, there was a mixture of sadness and anger…what did this have to do with what they had been discussing the last few days?

The aim of the conference was to come up with an agenda for the Dutch government. It has to answer the question – what does Dutch society need in place in order to be creative. This agenda published on Friday consists of several elements on the concept of creative cities, creative economies, and creative commons. But there are some things missing from the discussion. I’m going to post my suggestions later this week. For now, the document is too much of a glossary and not enough of a working agenda. But once again – I am positive about these first steps.
Posted by Jonathan Marks at Monday, March 21, 2005