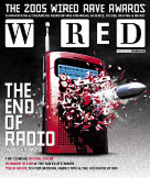 Colby Stuart suggested I read the blog by Wired editor, Chris Anderson. He wrote The Long Tail, an excellent article which first appeared in Wired in October 2004 and will become a book, published by Hyperion, in early 2006.(the Wikipedia entry on the Long Tail does an excellent job of expanding on this)

Chris argues that all media is getting Long Tailed at breathtaking speed these days. Music, TV, film, news and even advertising are being transformed by an explosion of variety and availability as the traditional bottlenecks of distribution fall. This month in Wired they focused on radio, where the combination of satellite, streaming, digital broadcast, radio TiVo, and podcasting is doing the same.

The features in the package--Wonkette on Howard Stern in space, Annalee Newitz on i-podder Adam Curry, and Charles Mann on How Sex Pistol Steve Jones is reinventing indie radio--inside Clear Channel are online, but the cool sidebars on sat radio, HD, radio TiVo, and how to podcast are not, so pick up a copy and check em out.

To whet your appetite, here's a list of ten reasons why traditional radio is hosed.
Posted by Jonathan Marks at Saturday, March 05, 2005