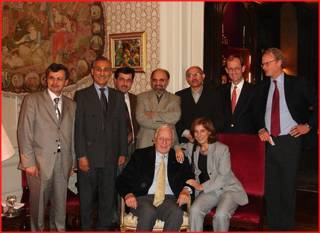 Steps Forward. The brutal assasination of Dutch filmmaker Theo van Gogh on November 2nd has triggered all kinds of discussions in the Netherlands. Most are very emotional. Dutch Muslims and Christians urged an end to a cycle of retaliatory vandalism of mosques and churches Tuesday as slain filmmaker Theo van Gogh was cremated, a week after his murder by a suspected Islamic radical Others are trying to take a few steps back and fit the relationships between Europe and the Arab World into a wider context. Last Friday I was part of a media discussion between journalists from the Arab World held in the Hague. There are several initatives going on in the UK, Germany to bring professionals together. If all goes well, one in the Netherlands will also take off shortly. There is a huge need for dialogue.