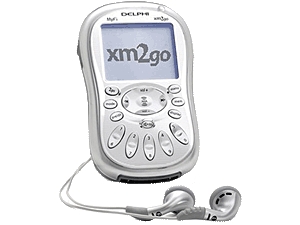 Delphi's MyFi is the first personal satellite-radio receiver to offer a truly portable, I-pod-style for satellite radio. It only works in the US - because you need to sign up for XM's pay radio service. The MyFi lets you listen to all of XM's 130 digital stations anywhere you can see the sky...so not indoors without an antenna.. It will be available in December for a list price of US $350.

According to CNET, the MyFi has a programmable TiVo-like recording buffer that can store up to five hours of XM broadcasts. For example, set it to record a favorite radio programme overnight, and you can play it back on your commute without worrying about passing through tunnels or other reception blind spots. You also get some nice extras: chargers and stands for both your car and home, a cassette-tape adapter, an FM transmitter (to play broadcasts on any FM radio), headphones, a remote control, a belt clip, and a carrying case. Still not sold? The MyFi also displays sports scores and stock quotes, and in a pinch it can even be used as an alarm clock. But if the $350 list price is not enough, don't forget that you'll need to continue your $10-per-month XM subscription to make the MyFi more than a paperweight.

After years of luggable boomboxes, we're finally getting a truly portable satellite radio. The MyFi's small size and built-in recording feature have all the makings of a killer app for satellite radio--and the device is smaller and lighter than anything Sirius yet offers.