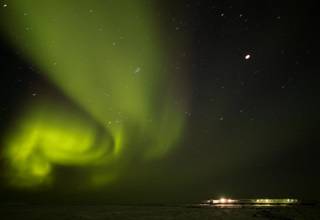 Old friend Dave Rosenthal sent me this fantastic shot of the Aurora he made in Canada. They were taken on the Southern shore of Hudson Bay in extreme northern Manitoba in the vicinity of the tiny town of Churchill (59.75 degrees N, 94.1 degrees W). That elongated blob above the buildings is the totally eclipsed moon (2 minute exposure).
Dave was there with his wife on a photo shoot for Polar Bears. Great to hear from him again - we had some great laughs when he worked for Radio Netherlands Media Network (propagation features) and for the science show Research File. These are really great shots.

NORDLYS - Northern Lights is just a fantastic website - direct from Northern Norway. If you're interested in the Aurora, then this site keeps coming up with breathtaking stuff - put's the world's problems into a very different perspective.

Very nice pics. Nature sure has some nice gadgets in store ;-)
Michiel (WereldKIDS)