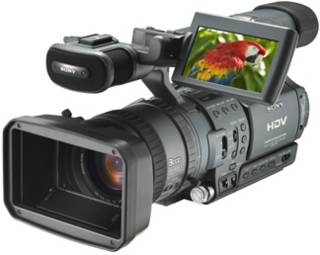 Now this is interesting. As a video documentary maker, I'm very interested in the new HDR-FX1 from Sony, due out in November for around 3500 Euro. It has a MUCH better resolution than what I am doing now. The new HDR-FX1 utilizes the 1080 lines horizontal resolution / 60 interlaced frames per second frame rate for the HDV specification, which records to standard MiniDV tapes. Wonder what the sound processing is like and whether they will come out with a Desktop recorder like the DSR-11.

The new Sony has apparently much better handling of low-light situations, better than the only other Prosumer HD camera on the market from JVC. The JVC came out last year with a minimum of 25 lux, the Sony boasts a 3 lux minimum. Try before we buy :->