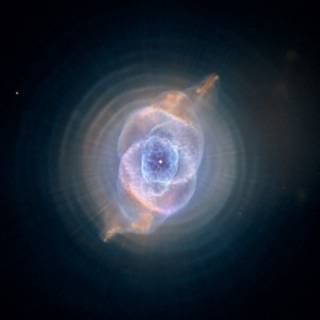 Amid the disappointment of the Genesis crash, pictures from the Hubble Telescope are proving fascinating. The so-called Cat's Eye Nebula, formally catalogued NGC 6543, is one of the most complex planetary nebulae ever seen in space. A planetary nebula forms when Sun-like stars gently eject their outer gaseous layers to form bright nebulae with amazing twisted shapes.
Hubble first revealed NGC 6543's surprisingly intricate structures including concentric gas shells, jets of high-speed gas and unusual shock-induced knots of gas in 1994. This new image, taken with Hubble's Advanced Camera for Surveys (ACS), reveals the full beauty of a bull's-eye pattern of eleven or more concentric rings, or shells, around the Cat’s Eye. Each ring is actually the edge of a spherical bubble seen projected onto the sky - which is why it appears bright along its outer edge. Another wonder from far off...