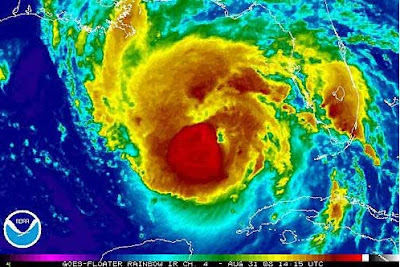 Frankly, unless you've been in the Gulf, you conclude that we really have no idea of what that's like here in Western Europe. This may indeed by a horrible hybrid of Rita and Katrina rolled into one. All the signs are that this isn't the last either. Wonder what it will do to the price of oil? Fingers crossed that there will be no loss of life.

Gustav, the way it is spelt here is Swedish, means "staff of the Goths", derived from the Old Norse elements Gautr "Goth" and stafr "staff". This name has been borne by six kings of Sweden, including the 16th-century Gustav. According to the Jamaica Observer I was reading this evening, this year marks the fifth time that the name Gustav has been used for a tropical storm in the Atlantic Ocean. The others were in 1984, when the tropical storm hovered over Bermuda, but caused no major damage; 1990 - Hurricane Gustav threatened the Lesser Antilles but turned away before getting close; 1996 - Tropical Storm Gustav formed west of Africa but dissipated soon after; and in 2002 when Hurricane Gustav came within miles of Cape Hatteras, North Carolina before turning away.
Posted by Jonathan Marks at Sunday, August 31, 2008