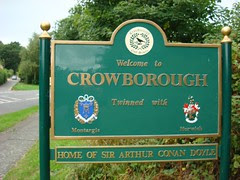 Crowborough Town Sign
Originally uploaded by Jonathan Marks
Thanks to Simon Spanswick (wheels!), I made an expedition to Crowborough, East Sussex today. It had nothing to do with Sherlock Holmes, although it was a bit of detective work. In fact it was to see what has happened to the old wartime transmitter site of Aspidistra. Now used by the Sussex police as a training ground we were delighted to bump into Bob Toynbee, a retired policeman, who has taken a great interest in what went on in Kingstanding during the war. The transmitter site is in fact a little further South of Crowborough, near Duddeswell. Delighted to find that material has been preserved there for those interested, mainly thanks to Bob's fascination with the place. That included a programme I made as a Media Network special back in August 1993 called Wartime Deception
Posted by Jonathan Marks at Thursday, August 14, 2008