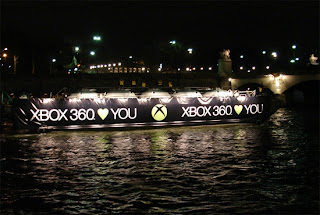 I wish we'd had the same sort of fun and games in Holland that Microsoft seemed to have organised in London and Paris. Marketingfacts and the British Gaming Blog report that Sony hired a boat to dish out the first examples of the PS3. Microsoft hired another boat with the text "XBOX 360 loves you" on the side.

Actions in London by Microsoft included setting up a website www.shkyw.org. which pokes fun at the fact that the PS3 machines are well over 6 months late. Perhaps a lesson for Sony's PR marketing team which is traditionally arrogant about its own products and dismissive of the competition. I remember last year getting a Dutch press release as a Word document. It had been edited from an English original, but the tracking changes had been left in - including some fascinating comments from various PR types along the way. Never ever send a Word document - always a PDF!