Dutch Railways - Trouble at the Terminus 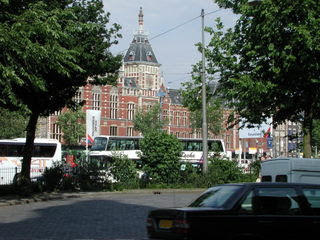 I have a running gag with Dutch railways who are trying to adapt ideas from the airline business but are so screwed up with their own bureaucracy that they are going nowhere fast. No wifi in the trains yet - free wifi in many Dutch buses. You can print out your own ticket at most airline sites. Dutch railways still wants to send you a ticket through the post. Having booked a ticket for yourself, there is no way to see the seating plan on international trains so you can ensure you're sitting next to a colleague on the same train. You can't book a ticket more than 3 months in advance. It's a long list of what's not possible. Several years ago I registered Dutch Railways as a URL - you'd think a bit more logical than the current address which is http://www.ns.nl/servlet/Satellite?....etc. No-one has bothered to call so far.

Oh, and don't try and pick up a guest from Amsterdam city station. They have put up electronic departure boards telling you the times and platforms when trains get the hell out of Amsterdam. But several friends of mine have noted that Amsterdam city station has no arrival boards. Which platform will my friend be arriving on? Good luck with that one!
Posted by Jonathan Marks at Saturday, March 17, 2007