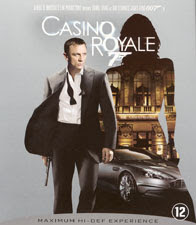 They have obviously had problems because the home page has short cuts to specific parts of the site which weren't there a few days ago. It turns out that the first 450,000 people to register their Playstation 3 (and they want to know an amazing amount for your profile) will get the Blu-Ray DVD of the latest James Bond Movie. The bad news is that it will take up to 45 days for it be delivered (that means the Middle of May) whereas the standard DVD version is in every store in Holland (like supermarkets) since March 23rd. I saw one poster saying Casino Royale was available in three versions, standard, deluxe and Blu-Ray, but obviously, it would seem, at the same time. There are some on-line sites claiming they have stock of the Blu Ray version of the DVD, and can deliver within 24 hrs.

This all begs the question. If Sony knew they couldn't deliver so many Bond Blu-Ray discs on time, then they should have chosen another Blu Ray title that did seem to available - and included it in the box with the new Playstation 3. Still sounds to me like Sony's Video and Playstation departments aren't as "converged" as they want their customers to be.
Posted by Jonathan Marks at Saturday, March 24, 2007