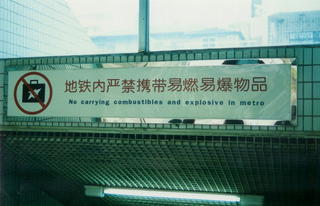 This sign above the metro entrance in Shanghai is not a joke, nor is it a recent move to prevent the kind of events we saw in London. There are quite a lot of suicide bombings in China, but we don't get to hear about it. This story is an exception...

(sign says: No Carrying Combustibles and Explosives in Metro)

Thanks to John Robb's weblog, Global Guerilla's for pointing this out.

A man has detonated a home-made bomb on a bus in the Chinese city of Fuzhou, killing himself and injuring at least 31 others, state media has reported.
The bomber was a 42-year-old farmer suffering from terminal lung cancer, Xinhua news agency said. The blast is reported to have ripped the side of the bus apart, and shattered nearby shop windows. Home-made bomb attacks are relatively common in China, often carried out by people angry at the authorities.

The motive for Monday's attack is unclear, but it follows criticism by medical professionals that the costs of healthcare have risen beyond the means of many people living in rural areas. There were more than a thousand reported bombings last year. Most go unreported by the country's tightly-controlled state media.
Posted by Jonathan Marks at Monday, August 08, 2005