I went to two of the three public lectures held by the Amsterdam New Media Institute. After a period of no (serious) activity in Amsterdam, it looks like some initiatives are happening to get interesting conversations going again. On Monday night they held an excellent session on Mobile applications at the Amsterdam World Trade Center. The WTC is busy during the day - deserted after 6 pm....the conference room was comfortable, but the acoustics - and sound system - only fair at best.

The presentations on Monday were seen from two perspectives, European and Asian. 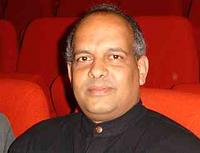 Madanmohan Rao (the program at the ANMI spelt his name wrong) from Bangalore is in inspiring speaker who really understands the applications that are going to make it - and the ideas that should simply remain just ideas. Euro Beinat, (yes he really is called Euro) of the Spatial Information Lab in Amsterdam also had some great examples of mobile applications that are being developed in the Netherlands, and which could be exploited world-wide. Could the Netherlands take a lead in developing this branch - a bit like the Endemol formats did with TV? Perhaps, but the companies concerned will need to rethink the way they market their ideas abroad. It was a pity that the publicity for the event was so last minute, reflected in the attendance figures - 30 for Monday, around 40 for the event on blogging on Tuesday (which I didn't attend). I don't believe the story that it was the weather that was the cause of the poor attendance.

Wednesday evening was better, with presentations by Talpa and KPN to a room of around 120. Talpa's presentation was disappointing because it was simply a classic vision of what is possible with the web. For commercial reasons Talpa is not letting anything go as to what they plan or their ambitions. If that is the case, perhaps it is better to say nothing at all than show us (free) graphs from the McKinsey Quarterly. Most people I spoke to afterwards were disappointed in what Edwin Tromp, Director Cross Media at Talpa had to say, - his response to questions afterwards was only a little bit more enlightening. It is clear Talpa Multimedia, for the time being, is focussing on the Netherlands with no ambition to do anything abroad. Makes sense, especially because in this sector there is no equivalent of MIP-TV (a conference to sell TV formats) for the sale of interactive/cross media formats. I see the EBU is taking some initatives there, but only for the public TV sector.

His scientific background shows methodical thought and his dry no-nonsense sense of humour and down to earth approach is refreshing from a company which is seen by the public as "reliable but boring". Looks like KPN has abandoned earlier plans to make their own content, Buitenlaar repeating several times that KPN is a distributor. They have also realised that UMTS is not the way to distribute broadcast tv to mobile...it will be DMB and/or DVB-H, if anything. The Netherlands could regain its role as a country where experiments are possible.

I agree with Buitenlaar's comments that there is tons of competitive infrastructure in the Netherlands, but very few creative applications. This is partly because the tools to be creative across several platforms are either too expensive, or too difficult for producers to operate. Way back in 1999, the "on the edge" work by small Dutch production companies, as well as VPRO and Endemol, positioned the Netherlands as 5 years ahead of most of Western Europe. But (endless) discussions about infrastructure have pushed the Netherlands 5 years behind countries such as Norway and the UK. The message that Holland has catching up to do has not got through to decion makers - and especially the risk takers. They are still living in 1999!

Yet, it is important that the Netherlands gets its content production right - and restores its reputation in the world as the "test bed for creative production". This country is not going to survive on its call-centre industry or banking/financial skills. I am amazed that most people are unaware of a significant brain drain that is happening within the entrepreneur/academic sector - just drive around the IT park in Amsterdam South (near the football stadium) or in Amstelveen to see that many of the leading foreigners have got the hell out. The fact that Sony moved its European headquarters to Berlin, or that some major international conferences are planning to go elsewhere than Amsterdam should be reason enough for alarm bells to be ringing at the Mayor's office.
Posted by Jonathan Marks at Thursday, August 25, 2005