In June 1995 we decided to borrow some airtime from Robert Chesal and broadcast a live programme from the Netherlands broadcasting museum. The premises were on the South side of Hilversum on the Oude Amerfoortse Weg 121 in what looked like a warehouse in those days. This was a decade before they moved to brand new premises on the Media Park, although much of the collection of old equipment didn't move with them. Since it was 60 years of the Dutch transmission authority NOZEMA we put on a ham radio station from the broadcast museum, in line with similar experiments we did on the Flevo polder in 1985. The shortwave transmitter site still stands on the Flevo polder, and Peter Veenendaal has posted a lovely video of the silent transmitter site which is now owned by the Dutch Ministry of Defence. We're told it is a backup system in case satellites fail or get hacked. One thing about analogue shortwave radio, it is difficult to block. 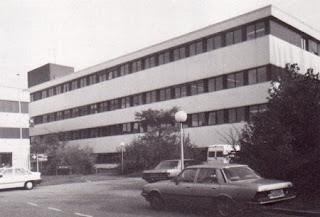 This programme was one of several live segments Jeff Clayborn and I did during the day marking 100 years of radio, 60 years of NOZEMA, and 10 years of Flevo. Check out the helicopter sequence when they put a new antenna on top of the Lopik TV Tower.

This episode is hosted on the Media Network vintage vault
Posted by Jonathan Marks at Monday, December 21, 2015