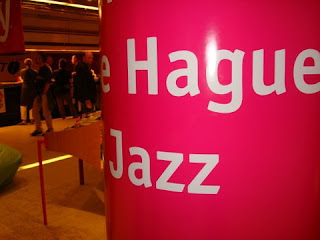 The Hague Jazz has become a victim of its own success.

It is described as Holland’s most friendly, comfortable, and intimate jazz party burst for two days on May 23 & 24. That wasn't my experience. Already at 1800, the "World Forum" location was buzzing as an estimated 25,000 tried to get into the building. What amazed me was to discover they were still selling tickets at a booth outside.

So, when it came to the star of the show Miriam Makeba, the main auditorium was heavily oversubscribed - and the special reservation cards at 2,50 each were just meaningless. It reminded me more of a rugby scrum than a jazz festival. Festival director Ruud Wijkniet needs to have a re-think on how they handle the main events, since all this happened last year. The bouncers at the door keeping people out were all full of apologies (including complaints that it wasn't like this when it was the North Sea Jazz Festival).

These kind of events are expensive to organise, but also to attend. They used all the clever tricks of having a token system (1 token = 1 Euro 10 cents) to pay for drinks and food. Yes, it may be a little faster for the personnel behind the counters. But the "exchange" system always means people pay more for a sandwich (Euro 5.50) without realising it and you tend to buy more chips than you need, just in case. This was all in contrast to the excellent music - haven't seen a jazz festival this well attended outside Holland, except in Japan.

The atmosphere was fine - until the last night when several African visitors were very annoyed that "white Europeans are again blocking access to our attempt at saying fairwell to a spokeswoman of the anti-apartheid movement". Ok, full is full. But the ticketing system was clearly at fault here - promising access that just wasn't possible. Irony indeed.
Posted by Jonathan Marks at Saturday, May 24, 2008

Well, I wouldn't agree with you. If you compare this Festival to any other indoor festival, you would find it marvelously organized. First of all, there were 15.000 visitors that behaved more then good. You had food all around but not on the floor, you had the opportunity to walk without being stopped by masses of people trying to go through you, drinks and food were more expensive then usual but that is not the fault of this Festival but EVERY festival. Besides, token system works everywhere in the world. especially when bigger events are organized, including some simple meaningless parties in the Hague where you would pay twice as much for the drinks because some no name person is playing music. As for Miriam Makeba concert, you can't blame the organizers. You should have relied on your own skills to find the way. There were several doors to enter Chez Ella. If you came early enough there was a possibility to enter. And then if you were late, you had to wait just few minutes, people were going out all the time because DIVA didn't produce expected level of good sound and stage movements. So there was always a possibility to enter. Despite everything this was good Festival with EXCELLENT organization. I don't know if you had the chance to attend North Sea Jazz at the same venue... If you did, just remember it...

Thanks for posting. OK, I just had a different experience with the security guards on the door. I agree that the atmosphere at the festival was good and I saw all age groups milling around and clearly having fun. Sorry to hear that Miriam underperformed on her last concert.