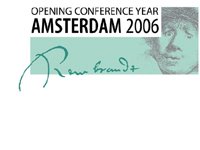 Oh dear... on Thursday I went to an opening congress to celebrate Amsterdam as a congress destination for 2006. I see the Dutch version of the website is already proclaiming the event to be a resounding success. I beg to differ. There were around 70 exhibitors - accounting for around 150 people in the Expo centre. They said that 500 people had signed up to attend the event as participants. I was there for most of the afternoon and I counted less than 200 visitors. The racks of unclaimed badges outside was a bad sign. Boom Chicago opened the event with a song about Amsterdam being tolerant.

The good news is that there are some new locations for congresses that look exciting - Artis, Lloyd hotel, and locations along the Amstel river. They combine design with some spectacular scenery which can inspire. But many of the other locations seem to the stuck in a time warp - too expensive and no clue that facilities like Wi-Fi are not a luxury but an essential.

Perhaps my biggest problem with the whole event is demonstrated by the English language website itself.... today the website greets me with press releases from May 2005!. There was also a strange list of Amsterdam's USPs on the website, although today it has been taken down.... 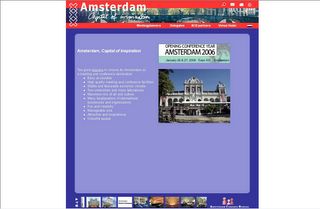