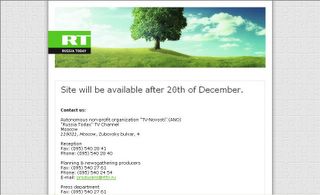 What is going on? Lou Josephs advises that the new Russia Today channel is already off the air after two days. The reason? Computer Hackers. This is according to the Gazeta.Ru internet newspaper quoted Russia Today's press service as saying.

"Due to attempts to break into the channel's computer system from outside and a suspected virus infection, the channel has had to cease broadcasting until technical malfunctions are mended," Russia Today said in a press release. "The channel offers its apologies to its audience,".

The 24-hour, English-language, state-funded television channel Russia Today was launched on Saturday, Dec. 10 and the first announcement about the channel was made in June. It is headed by Natalya Simonyan, a 25-year-old former Kremlin correspondent for state TV channel Rossiya.

This must be a very soft launch...the website says it will start on December 20th 2005. Is this a Russian way of launching things?