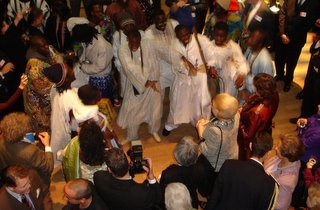 This afternoon I went to the annual Prince Claus Awards in Amsterdam, this time held in the new IJ Music Centre because the Royal palace at Dam Square is being restored. This year the theme was Humour with the main prize being awarded to Jonathan Shapiro, the South African political cartoonist. There was also a stunning performance by a Senegalese dance ensemble. It a preview of an opera which has been commissioned by the Prince Claus Fund and will be performed in Senegal and the Netherlands next year.

I expected the awards ceremony to have rather more jokes - bearing in mind the theme. But it was great to be able to speak to Shapiro after the event...he was obviously gobsmacked at getting the award. He deserves it bearing in mind the risks he has taken - and continues to take.