Met Loic Le Meur in April at the Blognomics convention. He is running the European section of Six Apart the web-log people. He is having a lot of success with web logs in France and making an impact with mainstream media. 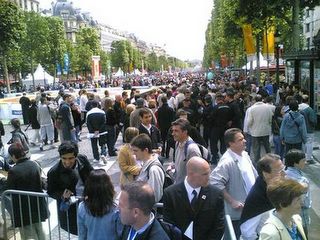 In a bid to push their bid for the 2012 Olympics Paris has transformed the Champs Elysee into a public fair with all kinds of displays of various events. Loic le Meur was obviously out there today. Posted this picture on his Mobilog.