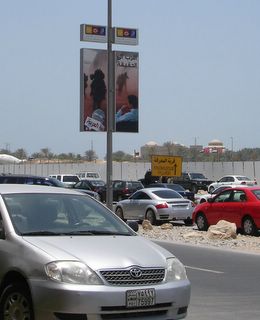 Dubai Media City. The ad is for Al Arabiya TV network and says they are closer to the truth. Dubai Media City has the potential to be a hub of activity for the reason, but don't turn up to make a documentary on it all...getting press passes to film is a nightmare here. I have never seen so much red tape. And again, Beirut has the outdoor cafe culture which attracts the performing talent. Dubai has the infrastructure, but I don't see the soap stars moving here (yet).