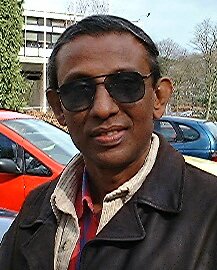 Victor Goonetilleke, a long time radio colleague, lives just outside the capital of Sri Lanka, Colombo. He sent this e-mail on Tuesday morning.

The tragedy is horrendous. Some of the video is frightening and so pathetic.
All of us are OK but working flat out trying hard to organize some emergency amateur radio communications. We're also doing some food distribution and things like that. Since the affected areas are so widespread in the country, things are very hard. Everyone within 1000 metres or so of the coast have been badly affected right along the coast from North to South on the eastern side of the island. In some areas as far as 2-3 kms inland. On the Western side not so bad, about 100 metres from the coast is seriously affected. As the quake was on the Eastern side of the island and the tidal waves came from the East/ South East. You have to be here to see the vast destruction..frightening.. Even though my family or very close friends have not been affected, we know too many who have perished. Some heart breaking stories are aleady emerging.

I got back to my home after a hectic day on Monday 27th. We are sending a radio amateur team to the worst affected area to link on HF (shortwave) and try VHF through one of our functioning repeaters. A coordination centre will be set up Tuesday 28th at "Temple Trees" at the Prime Minister's official residence in Colombo. We have some more volunteers who would go, but we have a shortage of portable equipment, transport, etc. to the affected areas etc. I hope our efforts tomorrow to link Hambantota which is in the deep South is successful as it has been totally cut off since the first waves hit..