Shining a light in dark times

I was one of the estimated 700,000 people who visited the Dutch city of Eindhoven on a couple of evenings this past week. This was for the 10th edition of the Glow Light festival. I think this year’s was one of the best ever, although for the really spectacular art installations you needed to explore the exhibits in the city park rather than the city centre. The photos below only tell part of the story because you need to see the installations close up and experience the specially composed music that often adds atmosphere to the short performances. But it was magic.

The festival ended in a different way than expected. The tragic events in Paris on Friday November 13th, when over 200 people were killed by a coordinated terrorist attack, has affected the mood everywhere. Eindhoven held a minute silence on Saturday night as a mark of respect for those who died. Many of the exhibits at GLOW are from French artists.

This is very much a family-orientated festival draws public awareness of the positive effects creative lighting has on our lives. My only critique is I think it’s a shame its only for a week and nothing is left behind permanently. As the city of Light, it would make a lot of sense to gradually build a permanent collection.

There is also GLOW Next, which was added in 2012 at Strijp-S, the site of the former Philips radio factories. This spin-off fills the need for a pipeline to ensure the main GLOW event stays fresh. International artists, scientists, entrepreneurs and residents collaborate here on innovative lighting art installations that address societal challenges. During the 2013 GLOW Next, for example, an interactive art work"Waves"was created by members of TU Industrial Design, ILI and local startup Sorama. They used patented technology to monitor sound in the public spaces. The result was such a success that it played a prominent part in this year’s GLOW Festival.

Interaction on this project led to a spin-off between Sorama and the Strijp-S smart lighting grid project. A service is currently being tested whereby the sound of breaking glass will trigger an instant increase of light intensity, contributing to a safer city.

Since the system can identify a particular sound, I’ve heard it said that it might also be used to identify gun-fire. I can (sadly) think of situations in US schools, where knowing the exact location of the gunman could have prevented the loss of many lives. Or what about the desperately tragic events on the streets of Paris, Beirut, and Ankara?

Eindhoven is working on making the city’s busiest entertainment area – Stratumseind – a safer yet fun experience. The ultimate goal of this real-world initiative by the city is to prevent brawls, to guide crowds when needed and to encourage people to enjoy the nightlife. The city council co-ordinates this living lab with a large consortium of universities, research institutions, local businesses and agencies. Together, they’ve deployed a wide array of sensors and security systems that monitor and try to influence peoples’ activities on this street. The number of people entering and leaving in this popular area is assessed with special open-source software connected to modified security cameras. This is combined with data on weather conditions and even beer stocks of the local bars to continuously assess the street’s activities. 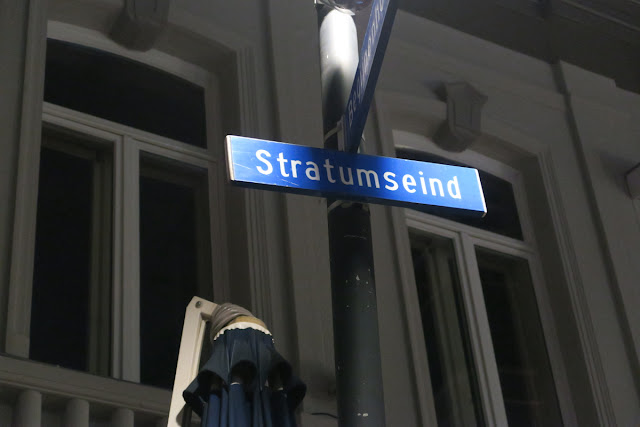 Managers at the dedicated control centre can vary the intensity of the LED streetlights, as well as adjust the hue. The Technical University provides a seasonal lighting plan, so that lighting levels are adjusted gradually at just the right time.

Reactive scenarios have also been shaped to reduce crowd tension based on previous incidents. When a brawl was reported, the initial response was to flood-light the trouble spot. But this only attracts large crowds of onlookers, making responding police-officers’ jobs more difficult. Stratumseind lab managers now try to distract by-standers with light displays in another part of the street. They’re also testing which light colour at which time is the most efficient in discouraging brawls or alerting police to possible criminal activity.

Directional sound monitors have also proved useful innovations. Originally placed to monitor whether bars were adhering to agreed noise levels, noise from the street made enforcement difficult. Now they’re examining if sound can be used to anticipate whether verbal abuse escalates into a brawl.

This Eindhoven living lab also monitors if people’s smartphone has WiFi or Bluetooth enabled. Messages can be sent to people to avoid dangerous situations arising on particularly crowded holidays. The next phase is to mix light with different aromas.

This Stratumseind project uses open-source software so that partners can easily experiment with this public information. But Tilburg University is checking that the public’s privacy is protected and that user-data is anonymised. To prevent possible hacking of the video server, the video analysis is done inside the camera. Open discussions about privacy and publication of data are on-going. The bars, for instance, don’t want to share data on how full their establishment are. They’re afraid people will stay at home, waiting until it gets busy. 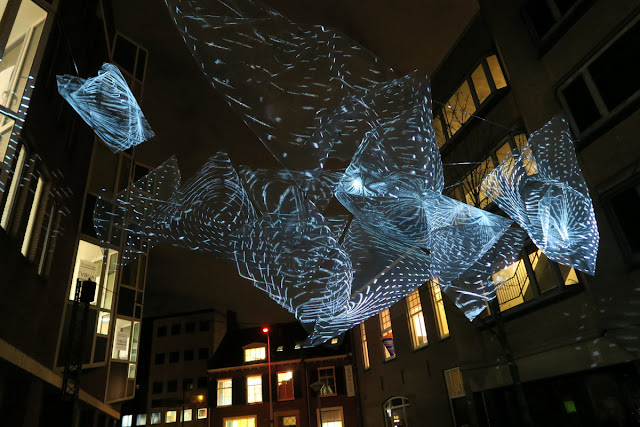 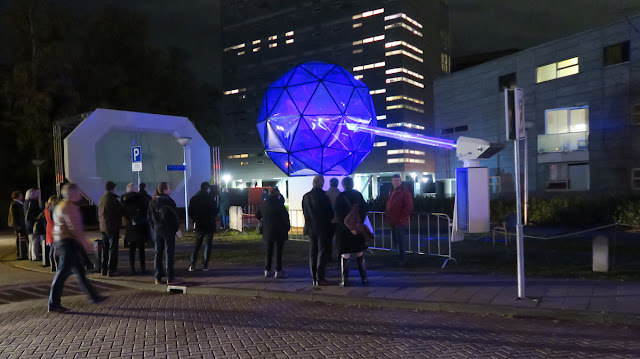 The exhibit above was made by 40 schools in the region, involving 2500 pupils working on the theme Architecture and Nature. The laterns make use of recycled bottles.

This reminded me of the test patterns you would find on early colour televisions after closedown. UV light is used to illuminate elastic cords strung between trees. 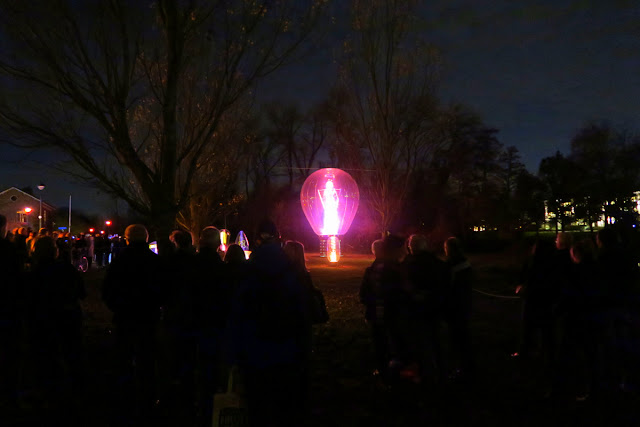 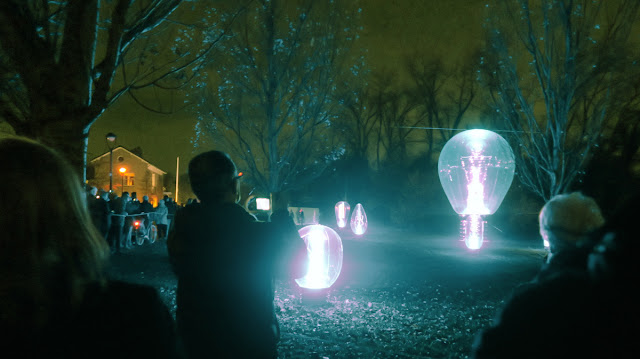 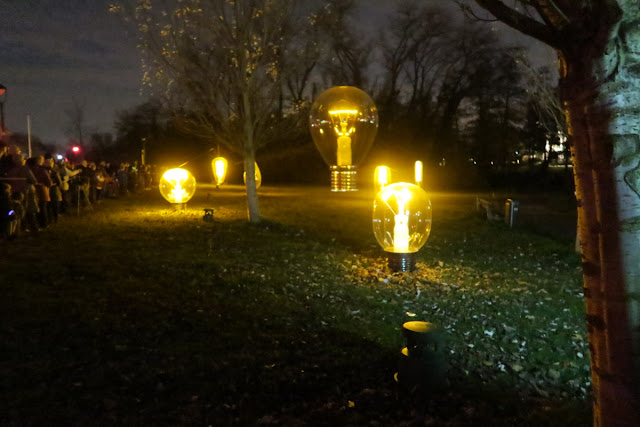 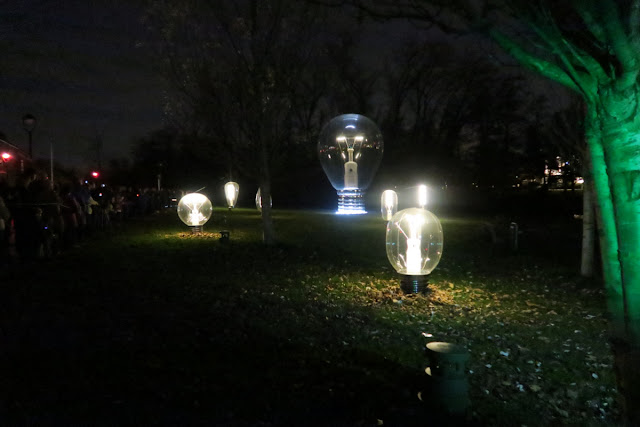 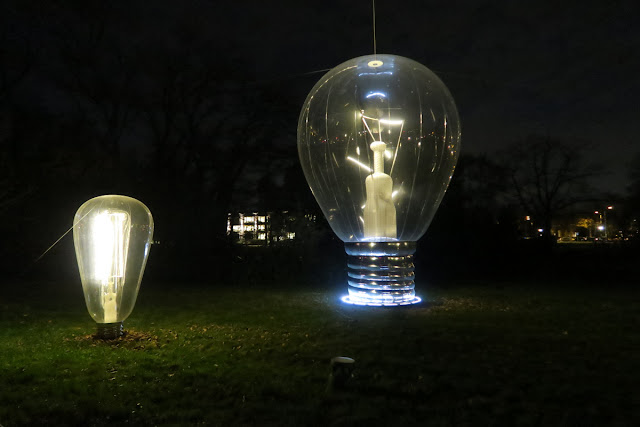 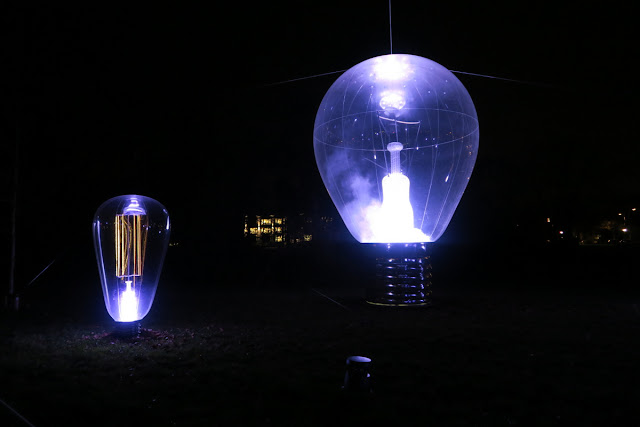 Yes, I was enthralled by the light bulbs of Incandescence. It reminded me of the fact that Philips was also a maker of radio valves. 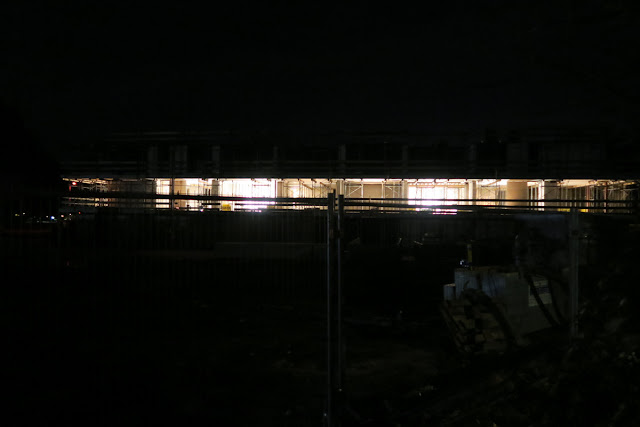 This residential building is currently under construction. So fill it with light and the authentic sounds of the hammering and drilling going on during the day. 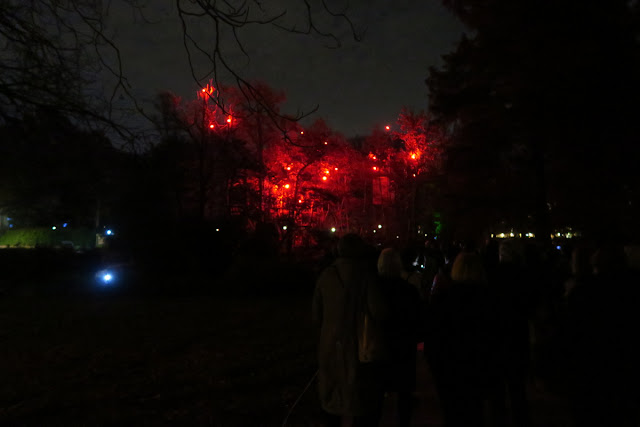 There is no Glow without a fire. Artist and technical engineer Ivo Schools saw what happened when a tornado raged across a forest fire. 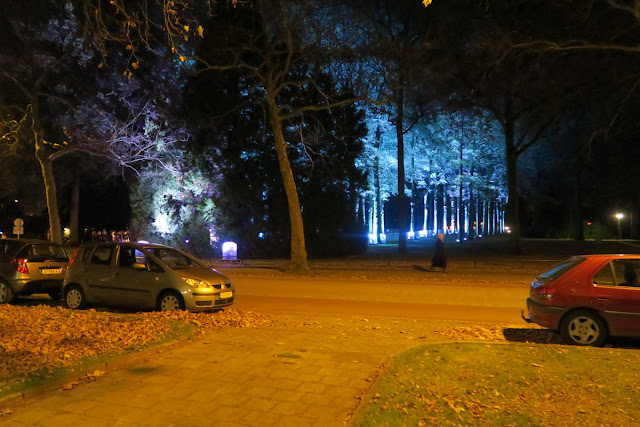 Magic sounds and light near the Park Theatre from the German company Forum InterArt. 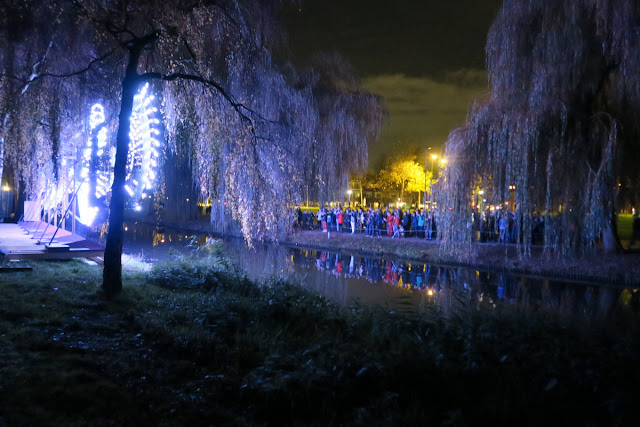 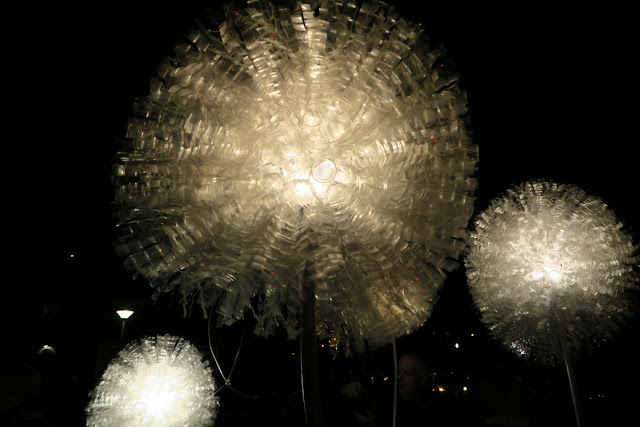 90 dandelions made from 9000 recycled bottles by Olivia d'Aboville. 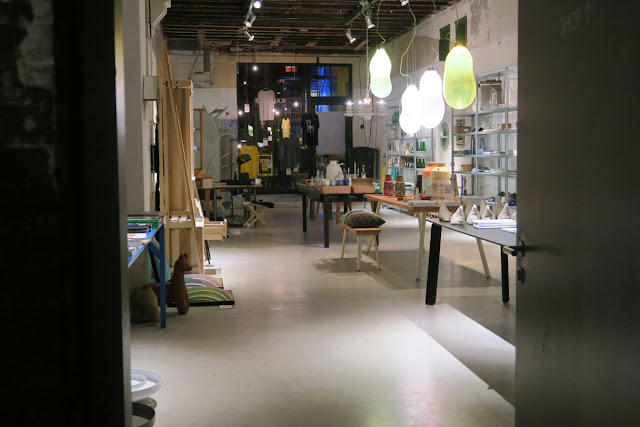 Great GLOW food at Kazerne, a new cluster where designers and technology interact. 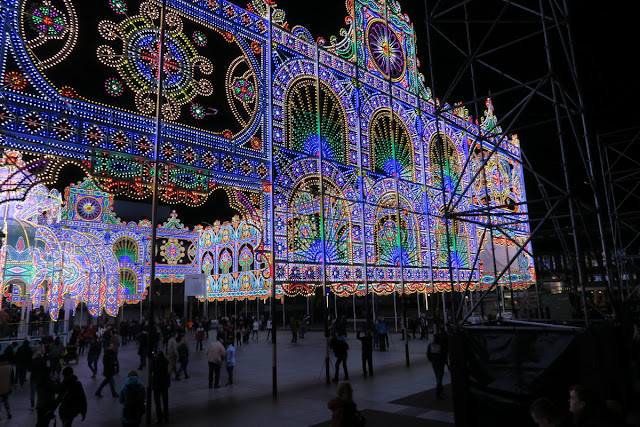 The return of an old favorite - De Cagna forms a central point infront of city hall in Eindhoven. 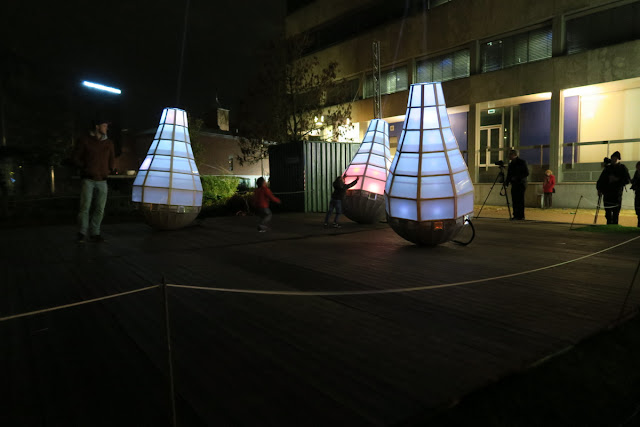 This light installation by Rob Vaessen and Tom Klaversma is very much a hands on exhibit. Push the bulbs to move the spotlights on the building next door. 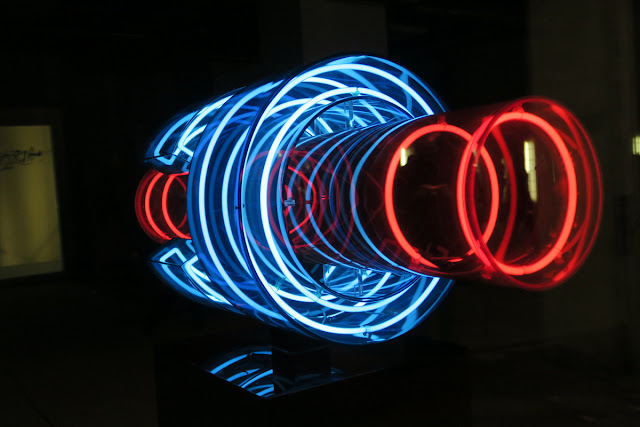 The organisers of GLOW are looking for ways to generate more income. I personally think that a showcase spots like the Catherina Church didn't work this year, because unless you bought the glasses you couldn't enjoy the performance - at least it was a shadow of the experience they did at the same spot last year. I would make money on lighting sticks/paraphernalia and refreshments. And I wonder why Philips Hue doesn't make more publicity for its mobile controlled lighting system for the home. They were walking around the city last year. Didn't see them this time round. 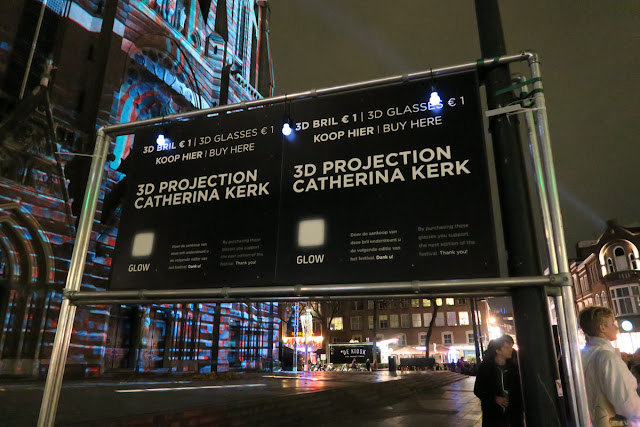