Why Choosing the Right Mentors is so important


We just completed the first of two Mentor Master Classes for Startupbootcamp HightechXL.

At first, it might seem strange that an accelerator would organise a master class for their mentors. Surely, they already know everything there is to know about entrepreneurship? Indeed several have started up companies on the Hightech Campus which were later sold for hundreds of millions of dollars. Yet we are taking a different approach with our accelerator. We're cherry-picking from the Lean Start Up methodology and adapting it to fit the world of high-tech startups. Since hardware is involved the money needed is more substantial and you can't change a minimum viable product by tweaking a few lines of code. But the rewards are also bigger if you get it right. 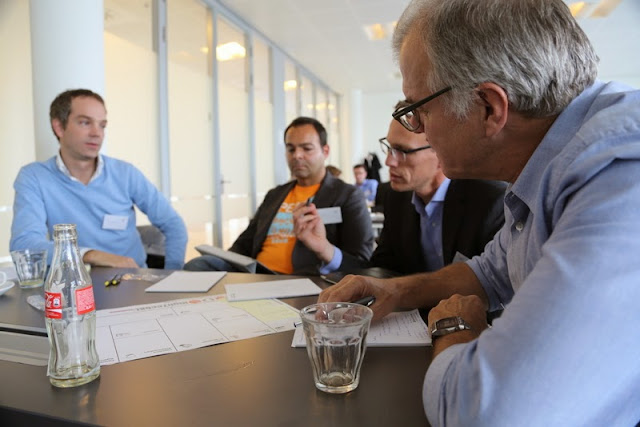 Last week, Startupbootcamp HightechXL organised its inaugural Master Class for mentors. It was designed to explain the Business Model Canvas approach we're taking and what we've adapted. It was also a chance for two startups to explain their challenges and how mentors really make a difference. Michail Boloudakis
Co-Founder and CEO of Kinems, one of the 9 teams selected for the 2013 Startupbootcamp program in Amsterdam. He came down to Eindhoven to explain the challenges of building a company that helps builds games for children with a learning disability. In my personal opinion, Kinems was one of the best teams to come out of the Amsterdam program.

Michail was clear that they were looking for mentors with very specific qualities.

"They must be an entrepreneur. We tended to avoid consultants because they often explain theory rather than practice. Entrepreneurs understand the pressures when things go wrong, as well as how to validate hunches with real customers. They speak from recent, practical knowledge and always keep trying. We also looked for mentors willing to open up their network, even though they know the startup is still at the early stages of development and may pivot. Having said that, the startup also needs to show initiative (i.e. following up suggestions or saying why the contact is not relevant). Good communication is essential.

"In the beginning you get a whole avalanche of advice, both on selection days but also in the first weeks of the program. We listened to all the advice. But we also had done a lot of homework.. We arrived at Startupbootcamp Amsterdam with something like 11 Business model canvasses already worked out. We knew where our weaknesses lay. I cannot stress enough that preparation is essential because there is no time during the program."

"I have a very specific recommendation for the teams joining Startupbootcamp HightechXL to do during their first few weeks of the program.  Be very clear as soon as possible about what kind of expertise you’re looking for. For instance, I knew we needed sales advice (cold calling, etc). Rather than wait for something to pop up  in the program, I used our mentor network and was talking earlier than others to someone who runs a sales accelerator. Our team got a lot of useful advice as a result of being pro-active."

"That preparation in the beginning was worth it because we clearly made the right choice of mentors. That's because even though we're 6 months further in our development, the lead mentors we chose are still on board. Because their skills are still relevant."

"The Amsterdam program is now over. Our technical support has moved back to Greece. But our headquarters and our sales team is based in the Netherlands. This part of Europe is an important market for us and it's a good base from which to plan our global expansion. We've found it an excellent environment for entrepreneurs. The Dutch are very focussed on the bottom line and deadlines. And they say what they mean. That takes some getting used to, but it means you identify problems so much faster. There is also none of the hierarchy that you find in other countries.  The mentors lend their credibility to the program. For instance, when we were talking to a hospital in Ohio, they immediately asked for references. We were able to report that we were doing trials with a Dutch therapy centre, through our mentor circle at Startupbootcamp.  That made subsequent acquisition so much easier. Lead customers often don't want to be the first customer.