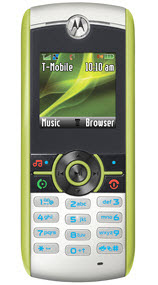 Now this is a curious story. The Motorola publicity machine has announced the launch of two new mobile phones meant to make social connectivity and responsibility accessible to people all around the world. I am particularly interested in the MOTO W233 Renew which, they say, is a device made from plastics comprised of recycled water bottles. I wonder how they get hold of these water bottles, since the recycling systems in Holland at least are great at recycling glass, but plastic bottles are not separated. I thought at first they meant hot water bottles - perhaps it was the colour and the notion that Woolworths in the UK must have a pile of them somewhere in unsold stock.

This is a good start, but mobile phone manufacturers in general have to do more to ensure that some of the essential raw materials inside these devices are obtained in a fair and ethical way. Take coltan, for instance, a shortened name for columbite-tantalite, an ore from which the elements niobium and tantalum are extracted. Tantalum is widely used in consumer electronics products such as cell phones, iPods, TV's, radios and computers because its essential to the production of compact, efficient capacitors. However, export of coltan from the eastern Democratic Republic of the Congo to European, Asian and American markets has been cited by experts as helping to finance the present-day conflict in the Congo.

The irony is that the main production of tantalum is in Australia, where Talison Minerals, operates the largest mine in the world in Wodgina. Tantalum minerals are also mined in Brazil, Canada, China, Ethiopia and Mozambique. The Democratic Republic of the Congo produces a little less than 1% of the world's tantalum, but coltan smuggling has been implicated as a major source of income for the military occupation of Congo. The Rwandan Army has made an estimated $675m in the last two years derived from Congolese coltan. I believe most of it goes to fuel to production of handsets and devices in China, though the trail of where it ends up after it leaves the region is difficult to follow.

So what? So it would be great if manufacturers had a sort of fair-trade label on handsets, iPods, laptops, etc to show that the components had been manufacturered from minerals mined in ethical ways.
Posted by Jonathan Marks at Tuesday, January 06, 2009