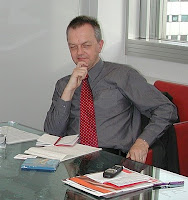 Twitter is alive this morning with the news that Nigel Chapman is leaving the BBC after nearly 31 years service. I first knew him when he was Deputy Director of World Service back in 2001, but he since went on to fill the Director's post for four years. He's to become the CEO of the children's charity, Plan International, early next year.

Nigel has presided over a turbulent shift in emphasis at the BBC World Service, as 11radio language services have closed to make way for new on-line and TV activities. It's not easy to explain the reasons for these changes to creative staff, especially when audiences are remote and each country has a different political and media structure. But, having been a judge at the recent AIB awards 2008 and seen a lot of WS entries, it would appear that the short term pain is now resulting into visibile gain - especially in the non-English language services out of Bush and Broadcastingg House. I for one wish him well. Since Plan supports a lot of programme production in developing countries, I don't think he's going to lose sight of the international broadcasting scene very soon.
Posted by Jonathan Marks at Tuesday, November 25, 2008

Please do not forget that the shocking death of Kari Blackburn has played a role in his leaving.