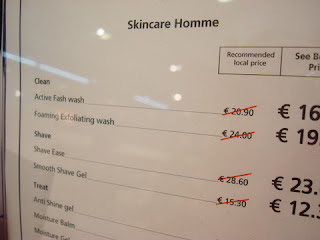 I travel through Schiphol airport a lot and notice there are times when the place seems to be awash with its own hype. Sometimes the airport is leaning over backwards to accommodate its 70% foreign passenger list. Other times it is more provincial than any East European airport. You can see it in the spelling on signs. Sometimes it is obviously done by a native speaker. Othertimes it looks like a Babelfish is at work. What the hell is a fash wash for 16 Euro?

When I pointed it out to the sales assistant, instead of saying thank you, she tried to cover the other signs. "It is not permitted to take photos in the Duty Free Shops", she says. Says who? Come on, the prices are not THAT competitive. Please put up signs says mobile phones and cameras forbidden in the shops. It will make you guys the laughing stock of Europe. 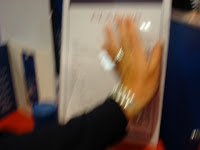