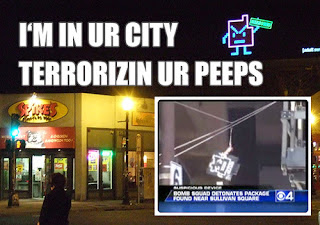 Well there is a new Turner prize....this time for sheer stupidity. Turner Broadcasting apologized yesterday for a marketing campaign which set of the biggest security scare since the September 11, 2001, attacks. It happened in Boston, USA and ended up closing bridges, shutting major roads and putting hundreds of police on alert.

The day-long scare began when a suspicious package was found on a steel beam under a bridge on Wednesday morning. Police stopped traffic on a major interstate highway north of Boston, cordoned off the area, deployed a bomb squad and blew it up.

"The 'packages' in question are magnetic lights that pose no danger," Turner Broadcasting System Inc., a unit of Time Warner Inc., said in statement.

It said the devices were part of an outdoor marketing campaign in 10 American cities for an animated television show "Aqua Teen Hunger Force" produced by its Adult Swim brand. They had been in place for two to three weeks in Boston, New York, Los Angeles, Chicago, Atlanta, Seattle, Portland, Austin, San Francisco, and Philadelphia.

"We regret that they were mistakenly thought to pose any danger," said Turner, adding that it had contacted law enforcement officials to give them the precise locations of the packages.

So how come the packages didn't have a label on them? Was it a guerrilla campaign? For sheer stupidity, this wins all the prizes.
Posted by Jonathan Marks at Thursday, February 01, 2007

Some of the stupidity is shared by the public safety employees. Any electronic hobbyist could have figured out what the device was, and anyone on a "bomb squad" who could not have tested the device for chemical explosives should be in a different occupation.